I want to ride my bicycle

Mother Russia caught a bad break within a week of arriving in Japan: After heading downtown and spending a couple of hours shopping, she returned to where she'd parked her bicycle only to find it gone. Uncharacteristically, she burst into tears. A young Japanese chap, spotting a winsome hottie in distress, swooped in, ascertained the cause of the problem, and assured her that he would search for it on her behalf. When she came home and related this story to me, I pictured him delving into seedy bars throughout Sanjou-Shijou like Rorschach in Watchmen, demanding information, cracking skulls when he failed to get the reception he desired, tirelessly striving to repatriate the errant machine.

In reality, he probably asked around at the local police huts, perhaps on nearby Kiyamachi. Bicycle theft, though a popular activity when the opportunity presents itself, is quite difficult in Japan due to a lock placed on the rear wheel of every unit. More likely, hers had been collected because she'd parked it illegally, not a big deal throughout much of the city but a potentially serious nuisance in the downtown area. They take them away in big trucks, hoisting them up through sheer muscular fortitude. At bigger stores, it's also somebody's job to go outside and redress the ranks every so often, to conserve space; once again, the locks leave them no choice but to pick them up and heave them to their new resting spot.

In return for a modest fine, her bicycle was returned to her with no further complications, and as if that wasn't enough, the guy lent her his bicycle in the meantime, claiming that he lived and worked close enough that it didn't really matter. In fact he tried to just give it to her, and it was she who demanded his contact information so that she could return it later. The following weekend she went to a barbecue at his house, so I'm not entirely convinced he wasn't making a play, but if he wasn't, well isn't that just Japanese kindness for you!

Had this helpful stranger not appeared, she would have been in a bit of a jam, because bicycle is by far one of the most common methods of transportation in Japan. Coming from Canada, I have a lot of trouble thinking of it as anything other than a child's toy, but in Japan, there is absolutely nothing undignified or stupid-looking about it. Schoolgirls ride to school. Suited businessmen ride to work. Stylish young people ride between engagements. It's even common to carry a passenger, regardless of whether or not your particular model was built to carry a passenger, their feet flapping in the wind, seemingly ever in danger of toppling straight off onto the cement but somehow never doing so.

Now you might want to wax poetic and spew speculation as to why Japan's unique culture has driven it to adopt the bicycle as such a prevalent means of transportation (and maybe throw in something about how the trains are so quiet, which you will believe to eternity unless you're avant-garde enough to venture anywhere outside Kantou). Actually though, we sort of know the answer. As I had it explained to me in my Japanese Foreign Policy class, the first few economic movements of postwar Japan can be examined by their top three most desirable commodities:

You can see how this reflects changing markets and a gradual return to prosperity, as we progress from basic mechanical necessities to modern luxuries. But for our purposes here, you can see how the bicycle was established early on as a must-have item. Still is today.

(Another historical footnote for you: My mother tells me that when she was a ryuugakusei herself (completely coincidental to my own Japanese aspirations), it was quite usual to buy a dilapidated bike, ditch it at the train station, and grab another abandoned one when you arrived at your destination station. When you were finished whatever you'd come to do, you would toss your new friend, train back to your original station, and then grab a bicycle with which to head home, possibly even the same one you'd bought. This sounds like a very interesting system with startling implications for the principles of Touka Koukan, but unfortunately I can neither confirm nor deny it, as I have never lived in Toukyou during the 1980s.)

So despite my protestations, bicycles are pretty entrenched into the daily reality of Japan, where they are not just discreetly convenient but actually own the sidewalk. As you will discover if you spend more than two minutes in the country, Japanese bicycles are all equipped with a bell, whose distinctive cry carries over the roiling chaos of life to seize attention and scatter crowds. It's a pretty demanding little sound, in fact, of which cyclists are unafraid to make liberal use, and it was some time before I was able to start interpreting it as “Excuse me, pardon me,” rather than “Hey, dumbass, out of the way!”

Though it helps that nobody in Japan wears helmets (as there is no law mandating it), I can't quite shake the impression that a bicycle automatically makes any rider look like a ponce. I never did give in, partially also because I secretly find them kind of terrifying, so instead I preferred to ride the train, which is much more fun and interesting anyway. However, nearly everyone else at my dorm bought one as soon as they could. They rode them to Cologne's mom's house. They rode them to Sanjou-Shijou. They even rode them to class, which always puzzled me, because the university was so close it seemed to save no time whatsoever. I would often depart at the same time as a rider began fiddling with locks and navigating bike-unfriendly paths, be overtaken halfway through, and then once more assume the lead in the final stretch as they stood waiting to cross the road to the bicycle parking lot, or searched feverishly for a vacant spot. 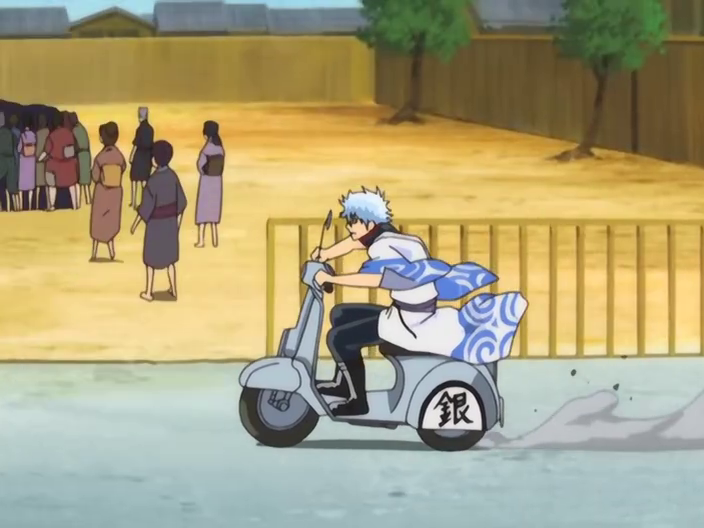 That said, I wasn't completely left bereft of two-wheeled temptation. I always thought that Sorachi Hideaki gave Gintama protagonist Gintoki a scooter because they're so unconscionably goofy, but then I arrived and found out that no, that is just considered a legitimate form of transportation here, especially among starving students. At my university, they even had their own parking lot, filled with rows upon rows upon rows of the little machines; when fourth block ended, their owners would leap astride them and take off in roaring crowds of a hundred at a time.  And, lacking a car, I came to badly want one of my own. Because, you know, I was too cool to ride a bicycle, but there's real dignity in a scooter.
Posted by Rude Boy Abroad at 18:15