It's four o'clock and I've just dashed off the final revision of the project that's been gnawing at me for weeks. I'm going to see the Koube Luminarie, which is a huge display of Christmas lights, so obviously it ends on December 17th. It's also ostensibly in memory of the 1995 earthquake, although you'd never know without being told, because mostly it's just an excuse to go somewhere with someone special. For me, it's just an excuse to go to Koube, because it's time to get a visit under my belt. After all, how can I call myself a Kansai man if I've never even been to one-third of Keihanshin?!

But on the way there, I've assigned myself a mission of the utmost gravity. During my first visit to Japan, eleven years ago, I was taken to visit the Pokemon Centre in Oosaka, and my fondness for them has only grown in that time. Meanwhile, the number of Pokemon Centres nationwide has grown to seven, and, breathtakingly, each one has a particular pin that can only be purchased at that specific location. Today I will take the first step in obtaining a full collection of the pins in question, and I swear to you all that no matter the cost I will complete it before I die. “Almost” is worthless; proxies are cheating. This is to be my white whale, the final and perfect expression of my Pokemon fandom.

But it doesn't start well. I don't see the building anywhere outside, and trying to navigate the Umeda-Oosaka basement is like playing Pac-Man in first person. It's tantalizingly close, I've probably circled it a dozen times already. I start to get sad and pissed off. How am I supposed to find the other stores when I can't even locate the one in my own domain? For that matter, if this is how things go in the country where I speak and somewhat read the language, what the hell is going to happen when I visit Korea? God this is frustrating, I'm never gonna-- 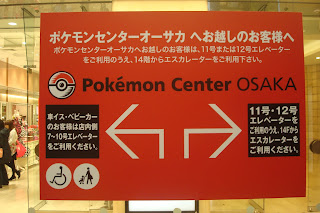 Holy shit I found it. 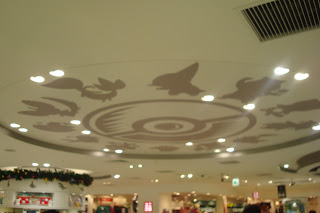 I fly up 13 flights of escalator. Fifteen minutes. The store isn't nearly as large or ostentatious as it was in 2001, in the height of the Pokemon craze, but I'm at no loss for things I want. Gotta prioritize. The overhead speakers are playing worryingly up-tempo music to encourage lingering customers to pick up the pace, making it incredibly hard to think straight. But I succeed! 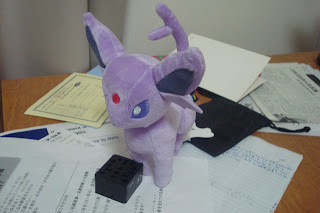 Riding around in the bag for hours mangled her legs a bit, so I can't get her to freestand right now (her gigantic head doesn't help), but I'm sure she can be fixed. 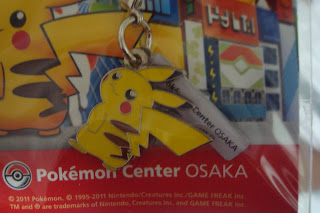 They didn't have specifically what I wanted, but this does have “Osaka” written on it. 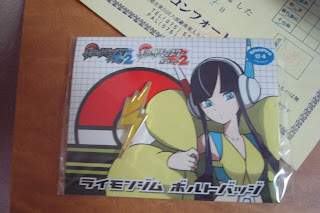 This is just cool.

When I get my stuff home, I'll look through the flyers they packed in and realise there's more stuff I need. Pikachu eating different foods – THAT'S the national collection I should be going for. But I should make sure to grab anything with the name of the location on it, too, just in case. And damn, this Efi thing is so cool, I restrained myself at the time but I really think I'm gonna be going back and getting the other six...

It's eight o'clock now. If I go to Koube now, by the time I enjoy the festival I won't be able to make it all the way home.

Me: Are we seriously doing this?
Myself: We are.
Me: We have no plan, we're going to a place we've never been, in a foreign country.
Myself: What are we going to do, write in our blog that we almost went to Koube?
Me: That blog is going to be the death of us someday.
Myself: It'll be fine, don't worry. I got this.
Me: Ok...I trust you.
I: Quiet down you two, people are staring.

A cute couple rides with me much of the way. I love cute couples. Maybe it's vicarious wish fulfillment. If so, that's fine. The third time she stumbles, the guy laughs. “You can hold onto me, you know.” “Thanks,” she blushes, shyly taking hold of his sleeve. A high school girl dozes on my shoulder.

And then I'm in Koube. 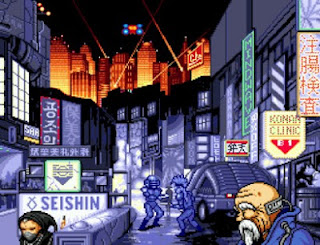 It's my favourite type of town. Swarming with young, fashionable people of varying repute enjoying each other's company, awash in wastefully bright lights shining from every angle. I decide I like Koube. Which is good, since I'll be spending the night here.

I feel like I'm playing Grand Theft Auto and the game's just opened a new borough for me. Maybe it's not as interesting as the old areas, probably I won't be spending much time there aside from story missions, but I still like the look of it and for the moment it has my full attention. I'm stumbling around, happily confused, spotting a million things I'd like to investigate and wanting to walk off in all directions at once. And once you've been there the first time, you can go again whenever you want. Koube is just another point in the geography of my life now.

It's refreshing being back in a real city for once. Local ordinances limit the height of Kyouto buildings, the idea being to preserve its Old Capital flavour. This might make it a bigger tourist draw, but seems a little wrong-headed from where I sit. In its heyday, Kyouto was the biggest and liveliest spot in the country – and so you think that to capture the Kyouto of a thousand years ago, it needs to seem a thousand years out of date? Luckily, Oosaka and Koube are better known for being on the cutting edge. Much more my speed.

The streets of Sannomiya are relatively straightforward and logical when compared to Umeda's spastic autofellatio, and I figure that this, combined with my normally impeccable sense of direction – which has gotten me out of more than a few potential scrapes here, by the way – will make it difficult to get lost, but I've always been one to defy the odds. Despite the density of the party area, suburbia is almost immediately adjacent. I figure this is because Koube, though decently large, stretches around the harbour, drawing it long and narrow. I spend a couple of hours wandering near the freeway.

Of course what leads me so far afield is my search for the lights, and although even my most promising leads take me nowhere it's quite interesting to see the Christmas displays all over the place. In Kyouto or Oosaka you'll hear Christmas songs in stores and restaurants, and sometimes...actually, no, that's about it. Koube is a little more into it for some reason. That said, I'm looking for this: 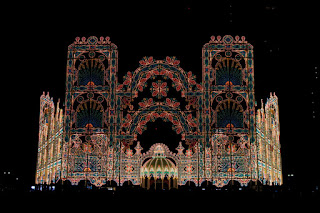 And can only find this: 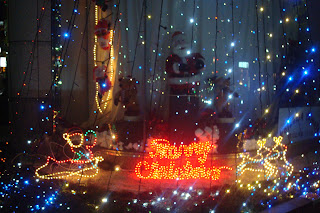 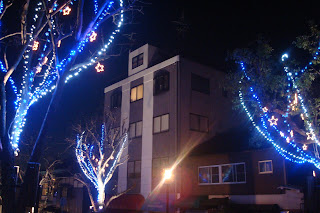 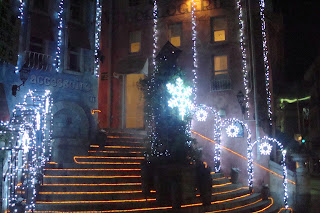 Interesting, but not on the same level. I never do find those fucking lights, and later on it turns out that maybe they actually ended the day before. After a while, the formerly exciting Sannomiya turns into a skeezy ghost town, and I'd really like to find a nice park or alley or something to sleep in for a few hours, maybe get arrested for vagrancy or whatever. But I'm wearing a very nice jacket, so I can't. At least it's warm, leaving me free to wander for hours, and hours, and hours, so I still end up having a lot of fun exploring Koube. 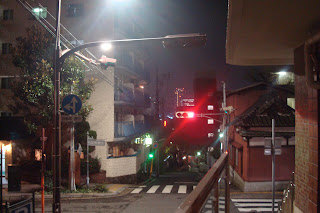 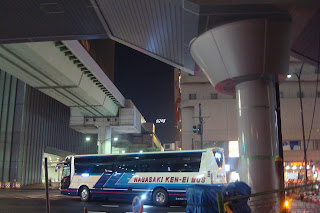 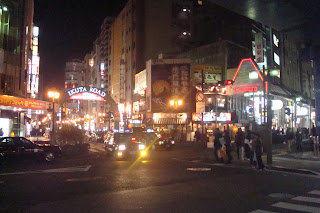 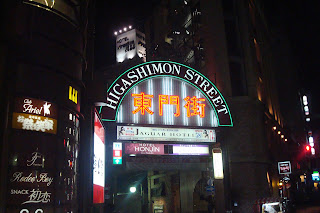 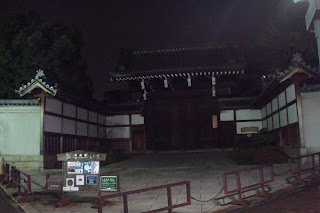 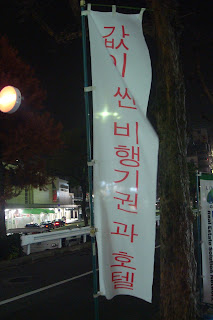 Wanting to keep from becoming depressed and urgey, I've lately been trying to look at the girls around me, but here I can't help myself. Kyouto girls are great, Oosaka girls are excellent, but Koube girls are outright fantastic.

Kyouto and Oosaka have a smattering of police, the occasional McDonald's, and one or two Christian churches, each. Koube has an inordinate number of all these things. It was like the Hell's Kitchen level of Deus Ex, and also religion, and also seriously how the hell many McDonald's do they really need?

Have I explained yet how recruiters work here? The way Japanese buildings are set up, where you have buildings made up of five stories filled with completely unrelated businesses, there are lots of restaurants and other venues you'd never find by chance. So they hire persuasive young people in distinctive clothing to try and coax you in. The ones in Koube are the most aggressive I've ever seen. The ones in Higashimonsen in particular are pushing Girls' Bars and the like, where you can pay for the privilege of having hot girls pretend you're interesting. Luckily I get ignored. In fact, sometimes they act like I'm not even there. It's kind of fun listening to them bullshit amongst each other in between waves of customers.

Speaking of which, just from looking around I think Koube has the largest population of Chinese and Koreans I've yet seen in Japan. Even witnessed a screaming drunk argument in Korean. Although I was the only sober person there, so doesn't mean much. A lot of signage was in Japanese and Korean but not in English, and there were rather a lot of Korean restaurants. I remark that Koube may be the most diverse city in Japan, which I then realise is meaningless since it's still 99% Japanese Japanese.

And finally: Couples kissing! In public! Where people can see and everything! We're talking a whole three of them! For a total of six people! In Japan! Koube: Another Side of Japan.
Posted by Rude Boy Abroad at 23:48