Friday, we have a fairly sizable Christmas party in one of the shokudou. The attendees are a coalition of the reciprocal exchange students, our tutors, and the (all-Japanese) international club. Anarchy in the UK hosts haphazardly. Food, performances. Hyeong dances to Gangnam Style. It's uneventful, but enjoyable.

And there's Christmas cake. Not a real Christmas cake, but like a cake cake, with customary strawberries. Incidentally, the other traditional food here is chicken. Sometimes I want to complain that this is not what Christmas is. But really, what we do in Canada is hardly Christmas either. We went deep into Xmas territory decades ago and never looked back. And anyway, it's not a KFC conspiracy, it turns out it's just because they don't have turkeys here. Let the Japanese have their fun. I can get into it. 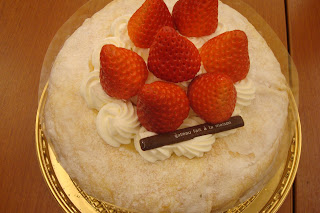 The bulletin board downstairs says “Classes offered” under December 24th. It's the worst possible choice of words, seeming to indicate that it's not mandatory, but if you really feel the need to get some study time in then hey, drop on in. It's only more confusing for we North Americans, all three of us, for whom the important day is actually the 25th.

I wake up this morning and I'm not sure how I'm supposed to feel. I settle on “pissed off,” but it's got no edge. Mostly I just feel blank. I've always kind of hated the omnipresent, commercial, overplay every possible Christmas song old and new until you want to poke your eardrums out, saccharine force-feeding session that starts at 0:00 on November 1st, so I was as surprised as anyone to find out I actually kind of miss it. I want to hear carols, and be told untrue platitudes about the meaning of Christmas, and watch Love, Actually and shitty seasonal specials. Well, that last bit I've always liked anyway. For foreigners who are into holiday spirit, family communion, and other stuff that leaves my hard heart unmoved, Christmas in Japan is probably a little bit awful.

But if that's not enough, don't worry, you'll have a whole different reason to feel bad about yourself! The focus here is very different from what you're probably used to, catering to couples, not families. Japanese Christmas is like Valentine's Day on cr...no, on MDMA.

Campus is almost empty, but almost everybody who is there is paired off. No, that must be my imagination. No, it definitely isn't. The air's finally taken on a bit of bite, and we get a little flurry, which makes me feel better. 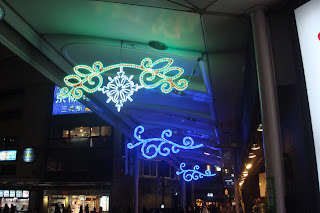 In the evening I head to Sanjou-Shijou to bask in other people's happiness. Couples everywhere, they're all adorable, and they're being waaaaay more couply than you will ever, ever, ever, ever, ever, ever, ever, ever see on any other day in Japan. I perform my usual aimless wandering, revel in the general atmosphere, and it's wonderful. For about half an hour. After that I just feel sorry for myself. For the first time in a long time, I regret being single. I meander between depression and tragic apathy, and it's difficult to say which is more poisonous. But I came because I wanted to be depressed, anyway. Better than feeling nothing at all, so why not wallow in it. Around 10 o'clock, 70% of the couples have dissipated, secreted away to apartments and love hotels. I don't want to leave, but I have a train to catch.

Probably be back tomorrow. That's the kind of self-destructive prick I am.

At home, I open the gift I've received from my parents. We've had our differences, still do, but they're not bad people. It's Hemingway's The Sun Also Rises. Excellent choice, except that I already own it. Read it on the plane, in fact. Somehow, my one Christmas present seems far lonelier than if I'd gotten none at all.
Posted by Rude Boy Abroad at 02:22