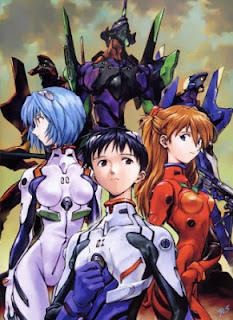 I never watched End of Evangelion. For one thing, I thought it was ridiculous that an anime that was originally written as a deconstruction of the commercialized mecha genre had itself been so commercialized. I also thought the original series was a complete work in itself that didn't gain much from an addendum. And finally, I thought that the last two episodes were artful and evocative.

Rather than broader speculation, I'm going to do something slightly more succinct and possibly more interesting, and instead submit my personal interpretation of the story and its meaning.

The constant use of Christian symbolism within Evangelion is immediately obvious, at least in its stylistic choices. The main enemies are called “Angels” (使徒、“Apostles”), they're named after various minor characters from the Bible, and the opening theme is called 「残酷な天使のテーゼー」、“Thesis of a Cruel Angel.” The alien who spawned them is called Adam; his rival, who created we humans, is called Lilith. Adam is kept docile in NERV headquarters by being pinned to a giant cross, his stem cells being harvested in the form of weeping blood; the Spear of Longinus, an extragalactic superweapon, has been plunged into his flank. 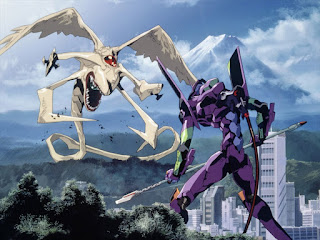 Lilith didn't arrive on the scene until well after Adam had set up shop, the so-called “First Impact,” populating the planet with fifteen children. But where had opted to create a handful of beings possessing immense physical and spiritual power, Lilith envisioned a planet overflowing with much smaller, more pathetic creatures who instead drew strength from their social bonds and the ingenuity she would bestow upon them. Unfortunately, no two objects can occupy the same space at the same time, either physically or metaphysically; “Seeds of Life” simply weren't built for cohabitation. The ideological divide ended with the vanquished Adam imprisoned underneath the Antarctic ice, where he remained until we ignorantly dug him up.

This directly caused the Second Impact, which wiped out most life on Earth. It also reawakened Adam's subjugated children, who then endeavoured to reunite with their progenitor. This is why they target NERV headquarters, where Adam's comatose body is being held (though for some reason the government knowingly exposes residents to collateral damage rather than evacuating them). Should they ever be successful, this will signal the catastrophic Third Impact.

As they discover, however, the Angels are invulnerable to all conventional weapons, owing to their unusually resilient “AT Fields.” Thus they scramble to produce something capable of penetrating this seemingly invincible barrier, ultimately discovering that it can be punctured by an equally strong AT Field. Since the Angels were created by Adam, only creatures of equal calibre are capable of generating a sufficiently strong AT Field, and thus they begin to construct the Evas. Owing to their pedigree, the Evas are possessed of seemingly godlike power themselves. 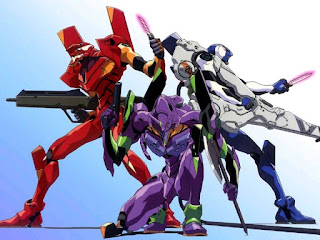 Now look what we've got. Adam and Lilith created Angels and humans, and then humans created the humanoid Evas. Adam's Angels are a diverse bunch, no doubt about that, but Lilith essentially modeled humans after her own form, or should I say, “made them in her own image.” In other words, God is just a man, and in a way, Man is a god unto himself.

God created us, and we've learned to create Gods. Even supposing that there is a God in our real world, and He created us, our imperfect ability to comprehend Him means that we are, in fact, creating Him in our own minds when we attempt to comprehend Him. You might liken it to Plato's World of Forms, in which there is another dimension full of the indisputably perfect versions of every single thing, and each instance of these things in our world is an earnest but flawed imitation. Constructing an understanding of God in our minds, based on the actual God, is like trying to construct a real-world chair based on Form of Chair. It goes against actual Christian doctrine, which contends that there is a single, knowable God, but it lends a whole new perspective to the words of Voltaire, “If God did not exist, it would be necessary to invent Him.” 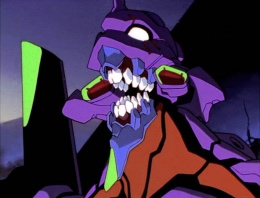 The Evas possess minds and wills of their own, and their pilots are required to use a combination of domination and coercion in order to use them effectively. Each is imbued with the soul of the pilot's mother, keeps him or her alive within a womb of breathable fluid (in fact Adam's blood), and are only capable of operating for five minutes at a time unless directly connected to a massive power generator. They're capable of rapid regeneration, are equipped with intimidating (yet stylish) armour, and, when restrictive measures fail, they seem to turn almost feral, with Unit-01 immediately devouring the heart of its fallen foe. Oh yeah, and all pilots are only 14 years old. 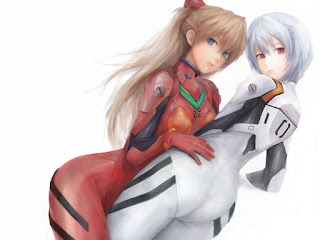 What I found most interesting, though, was the existence of an AT Field. Described as the barrier that separates sentient life forms from each other, all metahumans possess one – it's just that only Angels and Evas are capable of physically manifesting theirs'. And really, we are all insulated within our own little AT Fields – we can converse, project, and empathize, but we can never directly know one another's thoughts. Our AT Fields protect us, but also partition us. No matter how close we grow with someone, we will always be isolated. It's not necessarily a bad thing, but it can be the source of a lot of loneliness and misery. 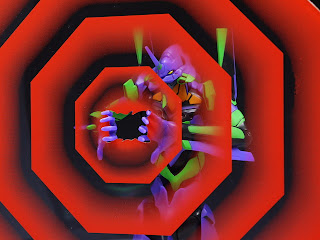 Which is intriguing, in light of the fact that the ultimate goal of the Third Impact is to achieve human instrumentality. This is a science fiction concept – emphasis on the “fiction” – wherein all human beings join a gestalt of all the knowledge, experience, and emotion possessed by all members together. We now think and act as one. Since differing opinions and values are essentially the source of all human conflict, war ends, social problems cease to exist, everyone shares. But you know what's funny? It's this supposed Utopia that the main characters are actually fighting against. In fact, many lay down their lives to prevent it, because they would literally rather die than lose their individuality.

The main cast have psychological issues out the ass. Misato-san is the picture of a prim and professional young military woman, but her personal life is a train wreck. Ikari is so obsessed with his dead wife he risks literally destroying civilization in order to reincarnate her. It's common knowledge that Tomino was in the depths of his depression at the time he created this series, which is why the setting is so bleak, the plot is so despairing, and so many major characters die, often pointlessly. It also informed the insecurities and personal struggles of each of the principal characters, and considering all of this the denouement is surprisingly hopeful. 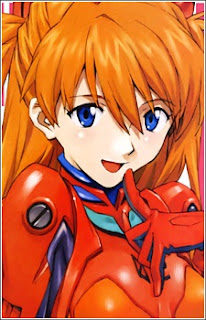 Episode 21 is dedicated entirely to Asuka and her problems. She's been quietly dealing with them the whole time, but this is where she finally snaps, breaking under the weight of her foe's postmodern existentialist psychological assault. Asuka is always trying to validate herself. She brags about her sync ratio, and makes exaggerated claims of her own skill. She's quick to point out that her Eva is the first one specifically built for combat. She bullies and manipulates Shinji while denying her burgeoning romantic feelings for him. And her precocious sexuality (I mean the Kaji thing) is more of a cry for help than anything – above all, Asuka just wants to be acknowledged. Her problem is that her entire sense of self-worth is invested in other people's assessment of her. The Angel exploits this vulnerability, forever ruining her confidence as an Eva pilot. 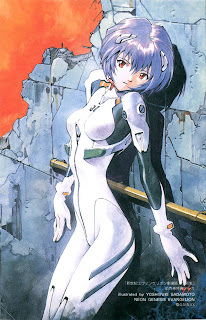 Despite any objections Kant might make, Rei is perfectly satisfied to be used as a means to an end, without any regard for her own welfare. She has no body shame, because she barely inhabits herself in the first place. She follows any order she's given, undertaking the most dangerous sorties without a second thought. She immediately agrees to act as a meat shield while her partner lines up a difficult shot; when he gives voice to the danger, she assures him, “You won't die. I'll protect you,” silently acknowledging that she very well might. Later she openly says that it makes no difference if she dies, because she can be replaced. It later transpires that NERV has a whole vat full of clones – soulless dolls – into which her consciousness can be placed should her current body meet with destruction, and, in fact, she's already died and been transposed several times in the past. But she seems to believe it on a deeper level as well, thinking of herself as no more than a mere tool, valuable only insofar as she is useful to NERV. Without any will or compulsion, who even knows what she'd be doing if they hadn't picked her up. 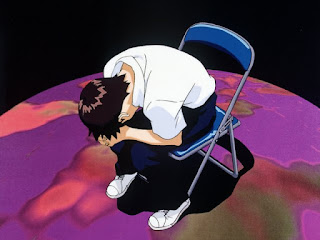 Finally, this same problem carries over to Shinji as well. Emotionally crippled by patriarchal rejection, he does whatever he's told, apologizes even when he's in the right, and agrees to join the NERV defence only because nobody else can do it. Even the usually loving and supportive Misato can't conceal her disgust at this, telling him that he'll only be a liability with that attitude. He feels shy and hesitant with Rei, meek and dwarfed by Asuka. His most significant win comes when he defeats the Holy Ghost to Adam's God – Misato explains that only those with a will to live deserve to. In the final two episodes, as one battle rages around his ears and another between them, all his deepest fears and insecurities are laid out once and for all. And what's the final verdict? The series ends with the afternoon sun of all things. He's surrounded by people who love and respect him. He's been convinced – or rather, has convinced himself – that things will get better, and that his life is valuable. You have to have respect for Tomino for the courage that must have taken.

All three of them are the playthings of their own inferiority complexes, as they're driven to do reckless, stupid, and self-destructive things due to their skewed misunderstandings of their own worth. This is the message that I personally get out of Evangelion: Accept your own value, acknowledge your own right to exist, act of your own will, and keep living.
Posted by Rude Boy Abroad at 08:41